The report from the company's research arm, StatCounter Global Stats shows that in November, Windows 8.1 at 10.95% narrowly beat XP to second place, pushing it to third at 10.69%. Windows 7 remains the most popular operating system on 50.3%. 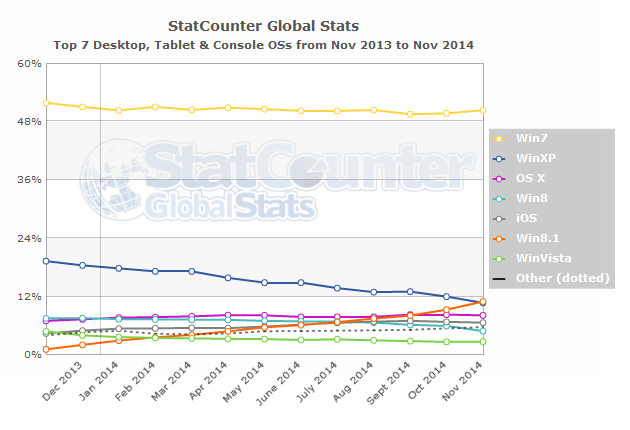 "Following a somewhat mixed reaction to Windows 8, Windows 8.1 has made steady progress since its launch," commented Aodhan Cullen, CEO, StatCounter. "It passed Windows 8 in August and has now passed Windows XP in November. The growth trajectory for Windows 8.1 has been positive but if current trends continue it will not topple Windows 7 before Windows 10 is launched in 2015."

StatCounter recently announced a new feature in response to Google's removal of keyword data. By integrating Google Webmaster Tools (GWT) data into its reports, StatCounter has given its members the ability to access all available keyword intelligence which they can slice and dice all within their StatCounter account.